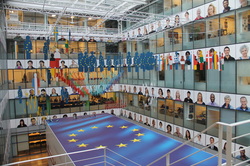 European commission could be in European Union like the Govern in Spain, who represents the European interest. The commission has the executive power, that is, applies the laws approved in Parliament and control them, but, the commission also has the legislative initiatives right, proposes the laws that the council and the parliament debates and approves after, so is key institution in Europe. The Commission manages the Budget of Europe and represents Europe outside also. It´s very important the independence of this institution, out of any pressure of any member-state or any other institutions.


Apart of 27 commissioners, in the commission work near 38,000 people who maintain this institutions. They work in several departments or Directorates-General (DG´s), as are known, like agriculture, education and culture, environment, informatics, and many others.